The luxury lifestyle of royals is always interesting, and the fact that Queen Elizabeth is one of the world’s wealthiest and most powerful women is no secret, making their lives much more thrilling to read about. However, while her life looks to be pretty nice, there is more to it, since there are many seemingly common activities that the queen is not authorized to do, and we are astonished to discover about them.

Explore these six strange things the Queen of England is not allowed to do: 1. Queen Can Only Wear Natural Makeup And Keep Her Hair Neat
Bright lip colours are frowned upon by royal protocol, according to Vogue. They should also use modest eye makeup. When they make a public appearance, their hair must be silky smooth and immaculate at all times. While royals are required to seem put-together in public at all times, quick touch-ups are not an option. Touching up their cosmetics in public is also strictly forbidden. 2. The Queen Has No Control Over Who She Talks To At A Formal Dinner
According to BBC, etiquette experts Debrett’s explain that it is normal for the guest of honour to seat to the Queen’s right, and the practise is that she speaks to this person throughout the first course of the meal, then changes focus to the person on her left for the next course. That is, she can’t pick and choose who she wants to talk to at a formal dinner. She must first talk to the person to her right, followed by the one to her left. 3. The Queen Is Not Permitted To Have Long Nails
Long nails are forbidden for the Queen. According to OK! magazine insiders, long, colourful nails are also strictly forbidden in the castle. Queen Elizabeth must also maintain proper hair and cosmetics at all times. 4. The Queen Cannot Leave Without Security Guards
Each royal is usually guarded by ‘up to five highly-trained armed policemen,’ according to the Mirror. Hundreds security officers are supposed to follow Queen Elizabeth when she visits her Scottish home Balmoral. 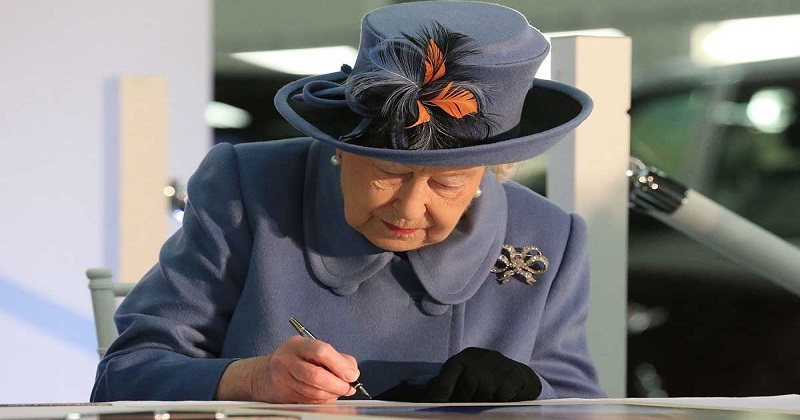 6. The Queen Is Not Allowed To Cross Her Legs
The most ludicrous regulation we discovered about the Queen is that she is not permitted to cross her legs. However, this regulation does not apply only to the queen; members of the British royal family are always required to sit in this manner in public: Legs and knees must be kept together, however crossing the ankle is acceptable. However, there is no specific formal restriction prohibiting ladies in the royal family from crossing their legs when sitting.