Cherrapunji is a great sight for those who want to experience something surreal and out of the blue. Much famed for being the land of many waterfalls, the living root bridges are something that will leave you awestruck for sure. 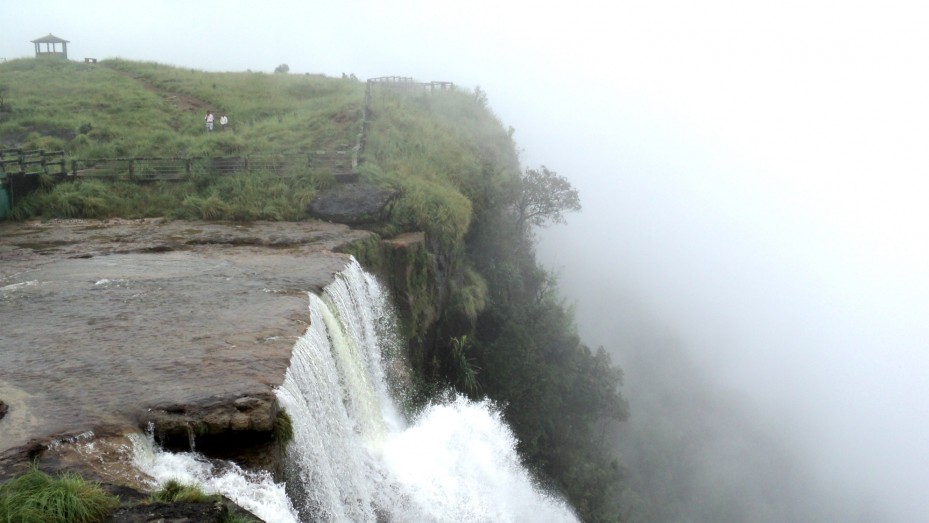 Cherrapunji currently the historical name Sohra is more commonly used; alternative spellings are Cherrapunjee and Charrapunji), is a subdivisional town in the East Khasi Hills district in the Indian state of Meghalaya. It is credited as being the wettest place on Earth. However, nearby Mawsynram currently holds that record. Though, it still holds the world record for the most rainfall in a calendar month and in a year. It received 9,300 mm (366 in) in July 1861 and 26,461 mm (1,041.75 in) between 1 August 1860 and 31 July 1861.
It is the traditional capital of a hima (Khasi tribal chieftainship constituting a petty state) known as Sohra or Churra. 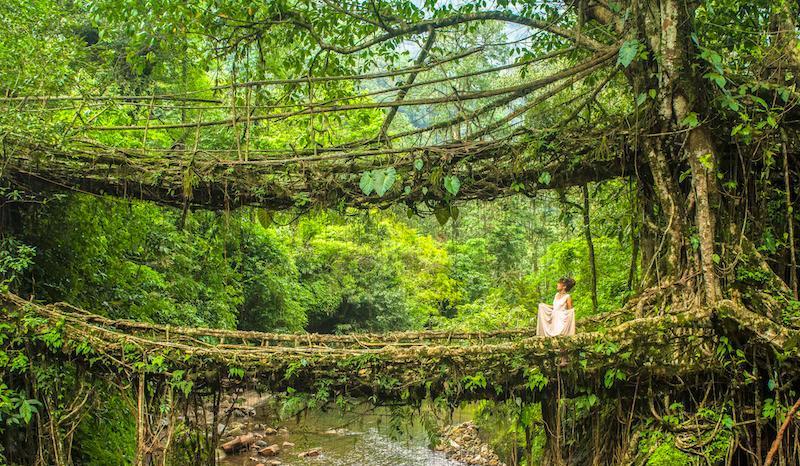 The original name for this town was Sohra, which was pronounced “Churra” by the British. This name eventually evolved into the current name, Cherrapunji. The name “cherrapunji” which means ‘land of oranges’ was first used by tourists from other parts of India. Despite perennial rainfall, Cherrapunji faces an acute water shortage and the inhabitants often have to trek for miles to obtain potable water.

Irrigation is also hampered due to excessive rain washing away the topsoil as a result of human encroachment into the forests. The Meghalaya state government has renamed Cherrapunjee back to its original name, “Sohra”. There is a monument to David Scott (British Administrator in NE India, 1802–31) in the Cherrapunji cemetery. The history of the Khasis – the inhabitants of Cherrapunji – may be traced from the early part of the 16th century. Between the 16th and 18th centuries these people were ruled by the ‘Syiems (rajas or chiefs) of Khyriem’ in the Khasi hills. The Khasi hills came under British authority in 1883 with the submission of the last of the important syiems, Tirot Singh.

Best time to visit: November to May 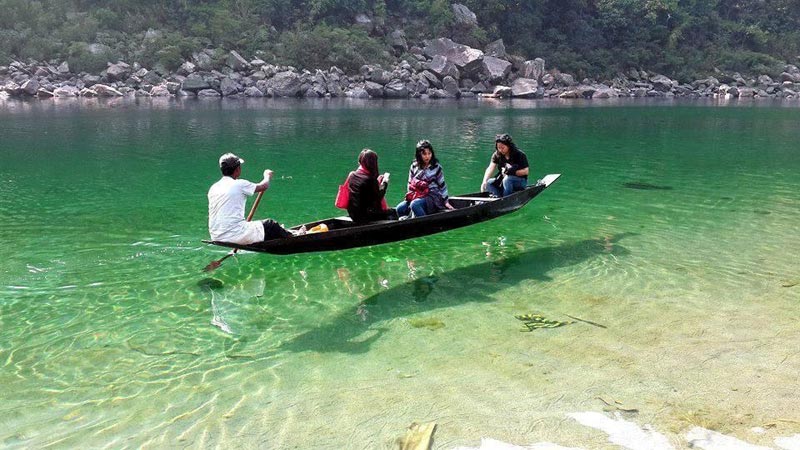 Must visit spots in Cherra: 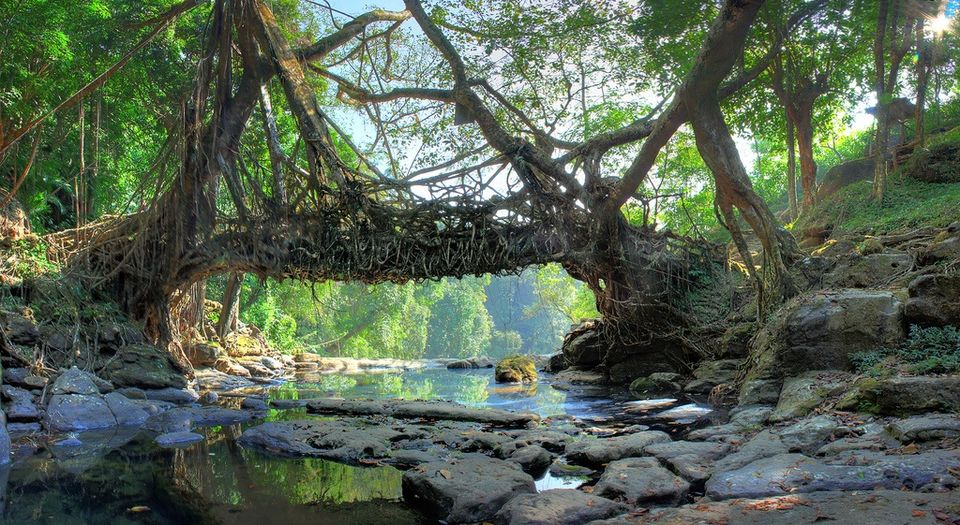 Meghalaya’s double-decker and single-decker root bridges are unique in the world and are a sight to behold. The bridges are tangles of massive thick roots, which have been intermingled to form a bridge that can hold several people at a time. Khasi people have been trained to grow these bridges across the raised banks of streams to form a solid bridge, made from roots. The living bridges are made from the roots of the Ficus elastica tree, which produces a series of secondary roots that are perched atop huge boulders along the streams or the riverbanks to form bridges. The root bridges, some of which are over a hundred feet long, take ten to fifteen years to become fully functional, but they’re extraordinarily strong – strong enough that some of them can support the weight of fifty or more people at a time. The bridges are alive and still growing and gain strength over time. 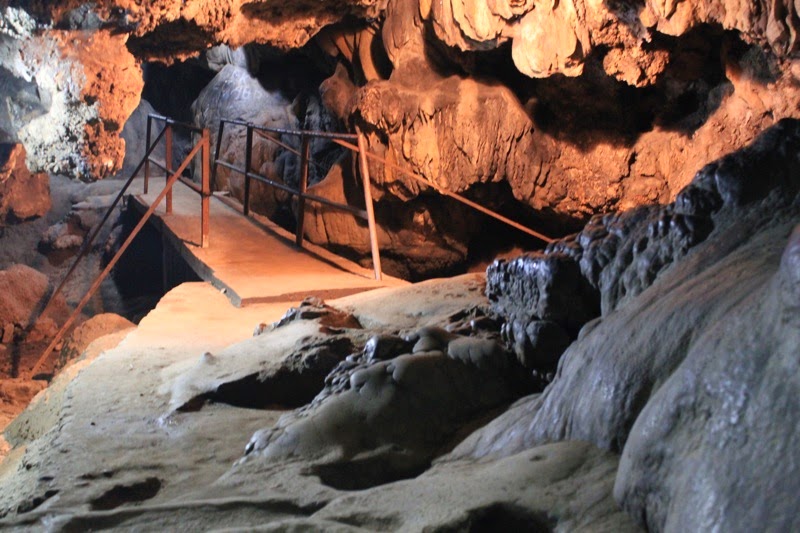 Mawsmai caves, a few miles further away from Cherrapunjee is fast emerging as a new tourist destination. The caves, made of limestone, spellbind the visitor the moment he enters the caverns. The entrance is well lit, but as one enters further inside, the eerie ness and the mystery, starts unfolding. Coupled with that, the constant dripping of water from the cave roofs and the formation of stalactites and stalagmites, a phenomena specially found in limestone caves, where the roof and the floor of the cave joins together to form pillars, adds to the beauty of the place. While at some places, the openings are big enough for a person to just about crawl through, at others, the roofs as high as 40 feet! Interestingly, while the entrance is large and roomy, the exit is so small, that a full-grown person has to kneel down for coming out into the open. 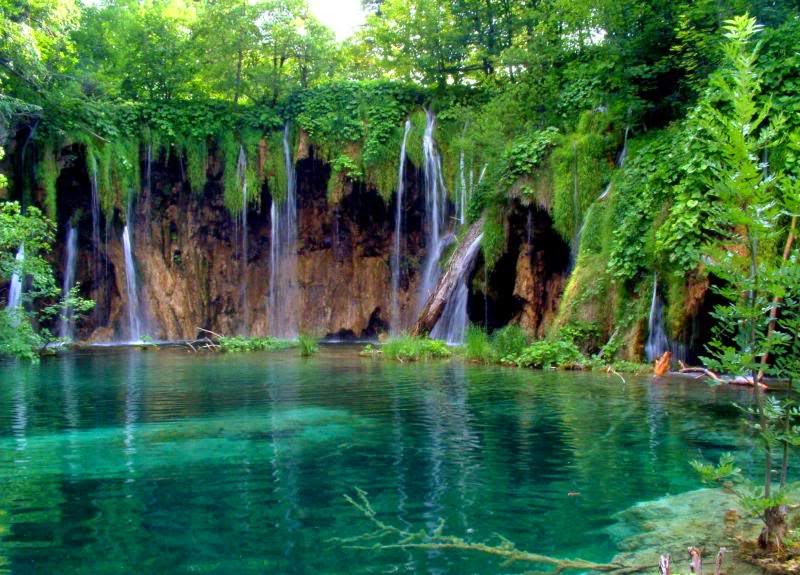 Nohkalikai Falls is the tallest plunge waterfall in India. Its height is 1115 feet (340 metres). The waterfall is located near Cherrapunji, one of the wettest places on Earth. Nohkalikai Falls are fed by the rainwater collected on the summit of comparatively small plateau and decrease in power during the dry season in December – February. Below the falls there has formed a plunge pool with unusual green colored water.

The name of the falls in Khasi language meaning “Jump of Ka Likai” is linked to a legend about local women Likai who jumped off the cliff next to the falls.