Main attractions to visit in Kanyakumari

Popular among the believers for the auspicious Kumari Amman Temple and astonishing Vivekanda Rock Memorial, Cape Comorin or Kanyakumari is one of the most famous pilgrimage travel destinations in South India. Kanyakumari is a district of Tamil Nadu and attracts people from across the globe for being situated at the southern-most tip of Indian peninsula.

The city gets its name from the temple of Devi Kanyakumari (Kumari Amman Temple), an incarnation of goddess Durga. The temple of Kanyakumari is counted among the 108 Shaktipeethas dedicated to the female form of supreme energy, Goddess Durga and visited by the unmarried girls in large numbers to get their desired life partner. However, to see the variety of temple architecture, you should explore the temples of Nagaraja Temple, Thanumalayan Temple in Suchindram, and the statue of Thiruvalluvar (next to Vivekananda Rock Memorial).

Kanyakumari is the southernmost point of peninsular India and the meeting point of three oceans-the Bay of Bengal, the Arabian Sea and the Indian Ocean. Besides its importance as a Hindu pilgrim center, it is famous for its beautiful views of sunrise and sunset over the waters. The multicolored sand is a unique feature of the beach here. 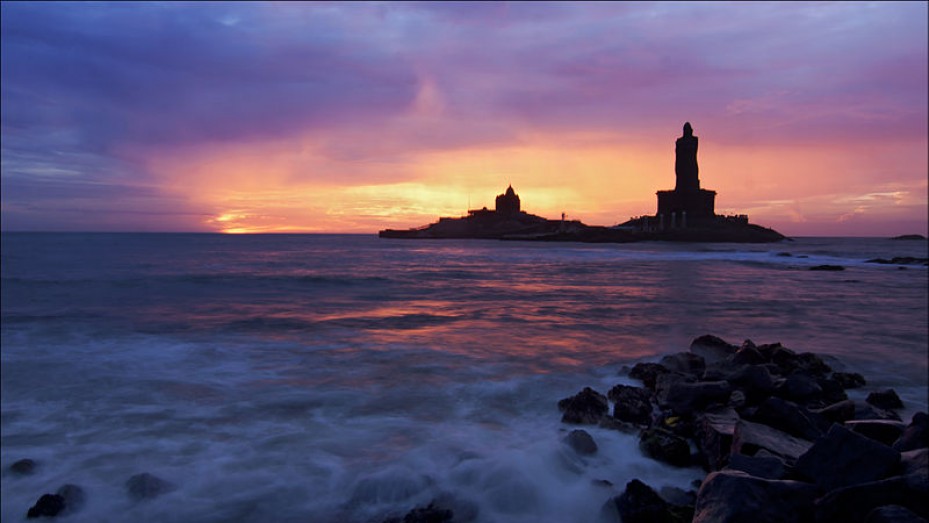 Kanyakumari was once referred to as the Alexandria of the east. This place has been a great center for art, culture, civilization, and pilgrimage for years. It was also a famous center for commerce and trade. During the early part of the eighth century AD Islam entered the southern part of India through the sea route with traders and missionaries. Through St. Thomas, one of the twelve Apostles of Christ, Christianity arrived in this area in AD 52. Islam, Christianity and Jainism have greatly contributed to the architectural wealth and literary heritage of this place. Kanyakumari was also under the control of the Cholas, the Cheras, the Pandyas and the Nayaks who were great rulers of south India. The architectural beauty of the temples is the work of these rulers.

During the British Raj, Kanyakumari was bestowed the dry title of Cape Comorin, necessitated perhaps by the Englishmen’s inability to pronounce local names.

Legend has it that Kanya Devi, an avatar of Goddess Parvati, was to wed Lord Shiva, the destroyer in the Hindu trinity. But he did not turn up at the auspicious time and the wedding never took place. The rice and cereals meant for the marriage remained uncooked. Even today, one can buy stones there that look exactly like rice and cereals. Local folks believe that they are the leftovers of the legendary marriage that could not be solemnized. As for the princess Kanya Devi, she became a virgin goddess blessing pilgrims and tourists alike.

The Chaitra Purnima Festival (the April full-moon day, celebrated in the first week of May), Navratri (last week of October), and the Holy Annual Festival of the Roman Catholic Church (fourth week of December) are the notable festivals celebrated in Kanyakumari.

Due to its proximity to the sea, Kanyakumari enjoys a pleasant climate and can be visited throughout the year. However, the best season to visit this place would be between October and March. During summers, the temperature can rise to a high of 34.8°C while it can dip to a low of 20.4°C during winters. The nearest airport is at Trivandrum (80 km). It is directly connected with Bangalore, Mumbai, Cochin, Delhi, Goa, and Chennai by regular flights.

Kanyakumari is connected to Thiruvananthapuram, Delhi, and Mumbai by broad-gauge railway network. Tirunelvelli (80 km) is the other nearest railway junction and can be reached by road via Nagarkoil (19 km).

The Kumari Amman or the Kanyakumari Temple, located on the shore, is dedicated to a manifestation of Parvati, the virgin goddess who did penance to obtain Lord Shiva’s hand in marriage. The temple and the adjoining ghat, picturesquely situated overlooking the shore, attract tourist from all over the world. The diamond nose-ring of the deity is famous for its sparkling splendor said to be visible even from the sea.